I try to predict the future by focusing on things that can change my mind. Technologies do this mainly by offering new perspectives on older problems. In a way, they perform a type of mind control that makes me a different person. They sort of re-wire my brain and challenge the way I've been approaching problems.

I've had a decent track record of doing this. I did one of the first courses on Angular.js, React, Vue, Github, Tailwind, etc. I'm no magician, I just keep my ear to the ground. Ocasionally though something like TailwindCSS is such a refreshing take that it gets a ton of interest and takes over the front-end world almost immediately.

I remember how I realized that Angular was going to be big. I went to a conference and at the time, there were talks on the popular front end frameworks...Angular, Ember and I can't remember the last one (so it couldn't have been that great). The other talks were well attended, but Angular's session was standing room only. I did find a good place where I could sit in the floor, but even before the talk started, I realized it was going to be HUGE.

With React and Vue, I just tried them and immediately realized their immense value. For React, it was the Virtual DOM and also the fact that Angular dropped the ball with their 2.x update. With Vue, its simplicity just made a ton of sense immediately...much more so than React's JSX AND it brought back the simplicity of the script install.

I'm not so much wrong about certain tools as they eventually go out of style or popularity. I did a course on Svelte, and it's one of those projects that's really tried to take off, but struggled. React's got too tight of a grip on the market. However in this year's State of JS it was cited as being a serious contender. I loved it, but I'm just not sure.

Now there are some new kids on the block like the much touted Astro, which expands on some of what Astro is doing with some creative hydration that loads JavaScript only when you need it. The problem with Svelte and Astro is market share. React is a beast, but also that the problems they're solving could be absorbed in some of the more popular frameworks. I'm excited to do more with Astro, but maybe by the time I get to it something more interesting will come along.

With Vue.js being adopted by Wikimedia over the others, it's got some momentum. Its problem is a bit different. It's so similar to React that its strength is also a bit of its weakness. If you're wondering, so far Vue is my favorite. Although working with React these days is more fun than it used to be.

Recently I found one of those tools that changed the way I do things. Those don't come along often. At first Obsidian looks like just another Markdown Editor, however because it works locally and with regular markdown files. It has some great features like an awesome way to work with lists, Kanban boards that help me organize my projects and much more. I'm using it as the basis of my productivity. Check out the latest episode.

I really enjoy when I get to work on something a bit different, so I'm pretty excited about one of my new courses called GitHub Code Challenges. Although GitHub isn't a programming language, this course asks you to think about a problem and then shows you the solution to solve that problem. I got to do think about problems that you run into often.

One of the things that keeps developers up at night is what to do when they commit some sensitive information like a password or an API. Here's an excerpt from the course that shows you how to solve that problem.

Git and Github Tips you should know

Speaking of which next week, I'm doing a special live stream espisode of The Toolbox, where I'll show you some of my favorite Git and GitHub tips and tricks to celebrate the launch of my new course on GitHub Code Challenges.

If you've got a lot of DIVs in your HTML (and who doesn't), it's hard to tell which is which. This VSCode extension will show you the ID and/or Class of each div. Simple, but it can really help you identify when you're missing a closing DIV.

Wow. Someone redid KidPix (a very old Mac App) in JavaScript and yes, there's a GitHub repo if you want to play with the code. I coded an app using those KidPix sound way back when for my daughter that she loved called PhoebeSound. Ah...those were the days.

This is pretty big news, Wikimedia Foundation picks Vue.js as their official JavaScript framework. Well, that was already my fave, so welcome aboard. 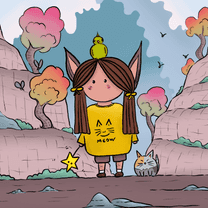 A fantastic write-up of what's coming in ES2022 with a bit of history and an explanation of what came before. Are you excited for the Class Fields addition?

I often use JSON testers to quickly visualize the validity of my data. The thing I like about this one that it is open source, it comes with an interesting API and is easily forkable since it's a GitHub repo.