A couple of years ago, before the pandemic, I went to the pretty awesome Smashing Conference. Had a great time and go to meet one of my heroes Addy Osmani. I was just walking around minding my own business, when, in the crowd, I saw this slender gentleman, blonde with a short mohak. For some reason, he reminded me of my friend and co-worker Morten Rand-Hendriksen, so I thought to myself. "I think that's what Morten would look like if he had a mohak".

Then, I turned my head around and lo and behold, there was the REAL Morten Rand-Hendriksen. My brain did this strange thing I hadn't experienced in a long time. I remember that for what seemed like one and a half seconds, I wasn't able to acknowledge the truth. My mind had no plans to see Morten at this conference.

Although we talked regularly to each other, neither of us had told the other one that we were appearing at this conference. This conference was in San Francisco. Morten lives in Canada and I live in Florida, so the shock was real.

Needless to say, we had a great time, I got to meet his parents, have dinner with him and his wife, plus see Morten's son in person. It was one of those special times in my life.

Are we there yet? 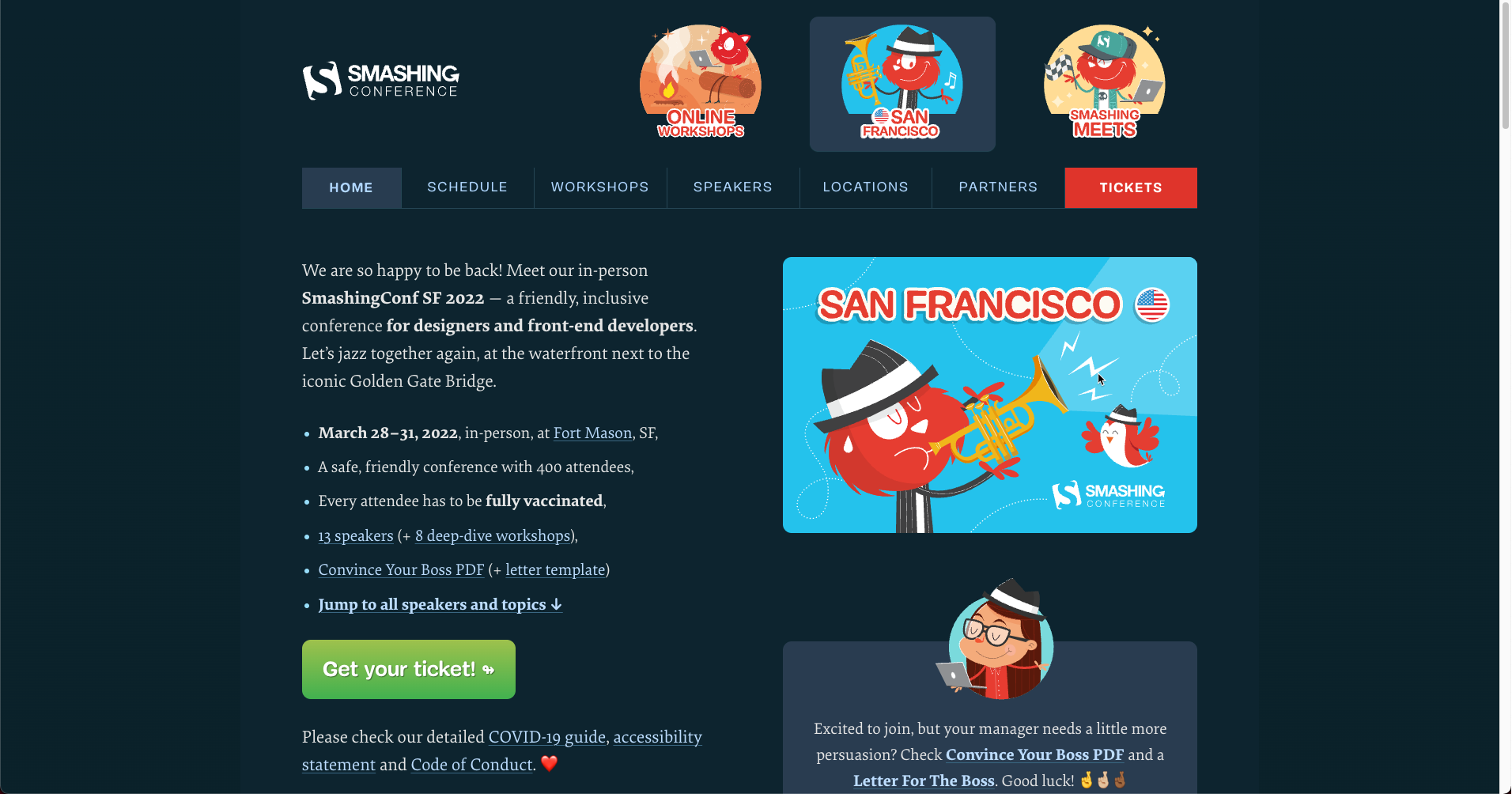 I'm remembering this today because the same conference is happening next year in March. No, not an online conference, but in person…for realz. This time I'm wondering what that's going to be like. Once again in San Francisco, this is the first time I've seen a conference offering in-person. I hope it works out, I could really use seeing my friends again. I told Morten that if he goes, not to tell me. 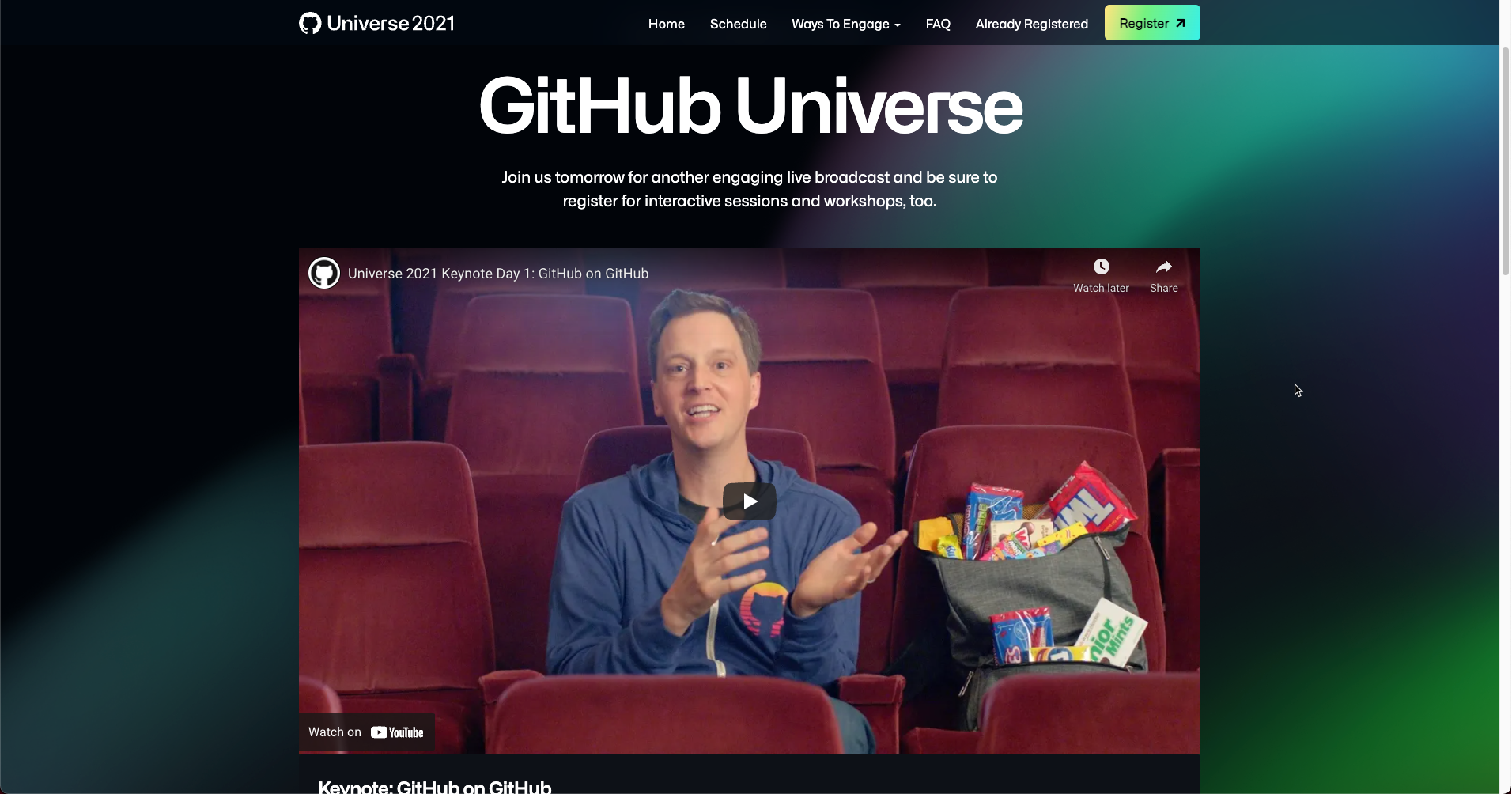 Something else that's old is new again, GitHub Universe is going on right now. That is one other conference I miss seeing in person. The keynote was yesterday, but the rest of the conference happens today.

This year, I didn't notice a lot of new announcements, but I appreciated a lot of the highlighted features. Check out the late episode of The Toolbox for my analysis with my favorite announcements.

The one huge announcement I did notice today is the release of an Alpha 3 of Tailwind CSS. They are really going big with super quick releases for this library.

The big thing about Tailwind CSS 3 is the JIT compiler, which I've added to my course on Tailwinds CSS. You can watch that for free if you follow me on LinkedIn by using this link.

The real update in this Alpha version is the addition of JIT to a special version of the CDN. All you have to do is include this script tag.

And you can even add plugins to the end of the link like I've done here to add the typography plug-in. This is like a special JIT version of the CDN link that will give you a lot less CSS and lets you use all of the special variants available without having to load up an npm module.

You wouldn't want to use this with production, since the file will be much bigger and it won't refresh well, but it's great for demos where you want to show TailWind CSS quickly. 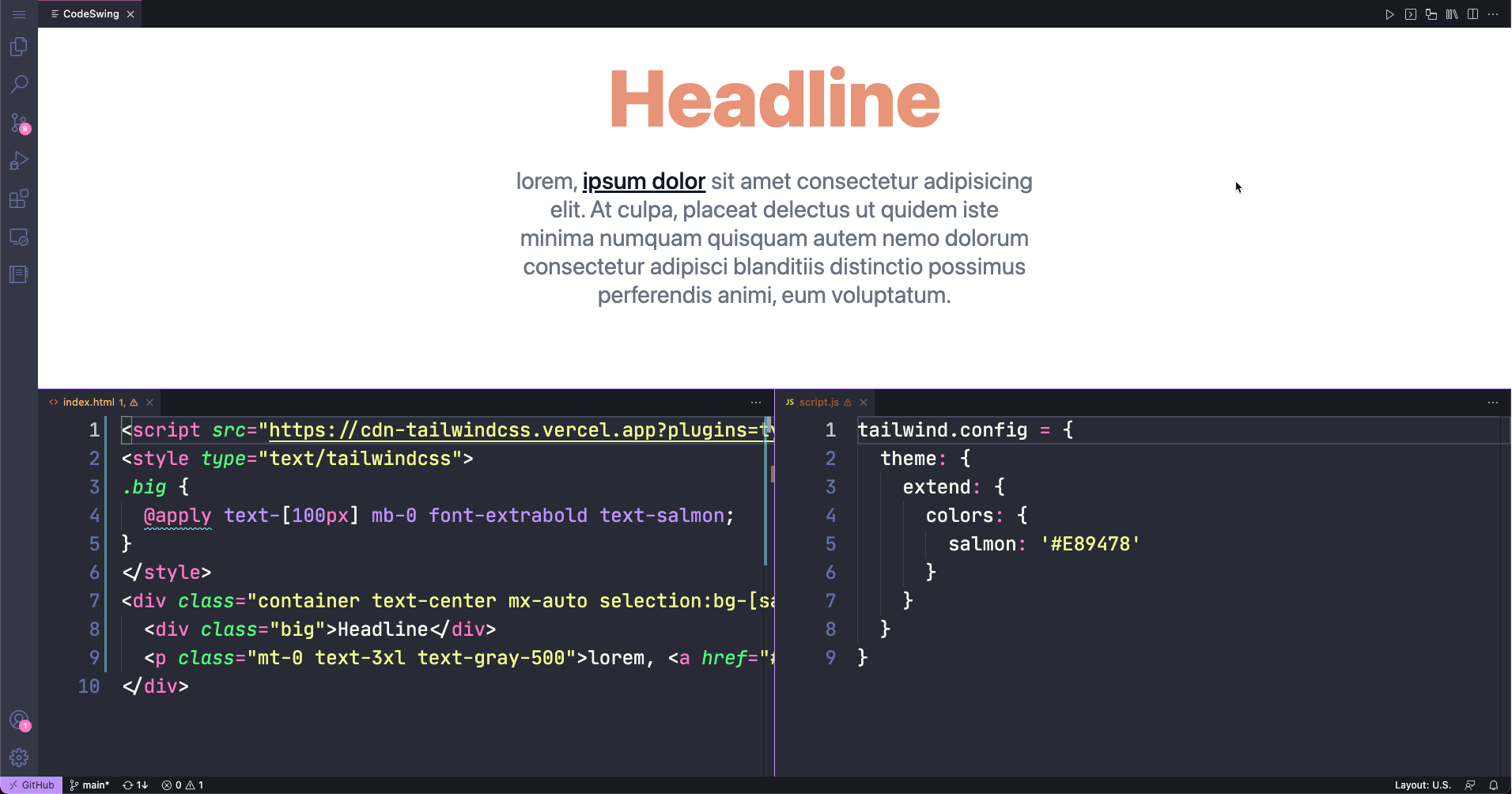 If you want to get started, you can take a peek at my starter codeswing that you can use with CodeSwing as a Github Repo. 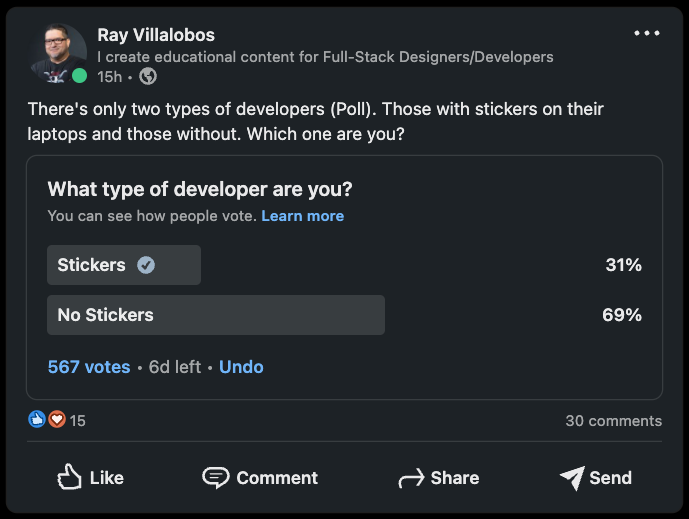 I spend tons of time creating content, which sometimes takes days or hours to produce. You never know what's going to do well. Every once in a while, you do something silly, like a poll on laptop stickers and the crowd goes wild. So go ahead, it's ok. Let me know what you think about laptop and stickers why won't you.

The best part of that post is the comments. Just in case you're wondering, here's my laptop a while back. It's got more stickers now, but you get the idea. It's ok if you don't have any, I'm writing this from my pristine mac mini, which is my main machine now. 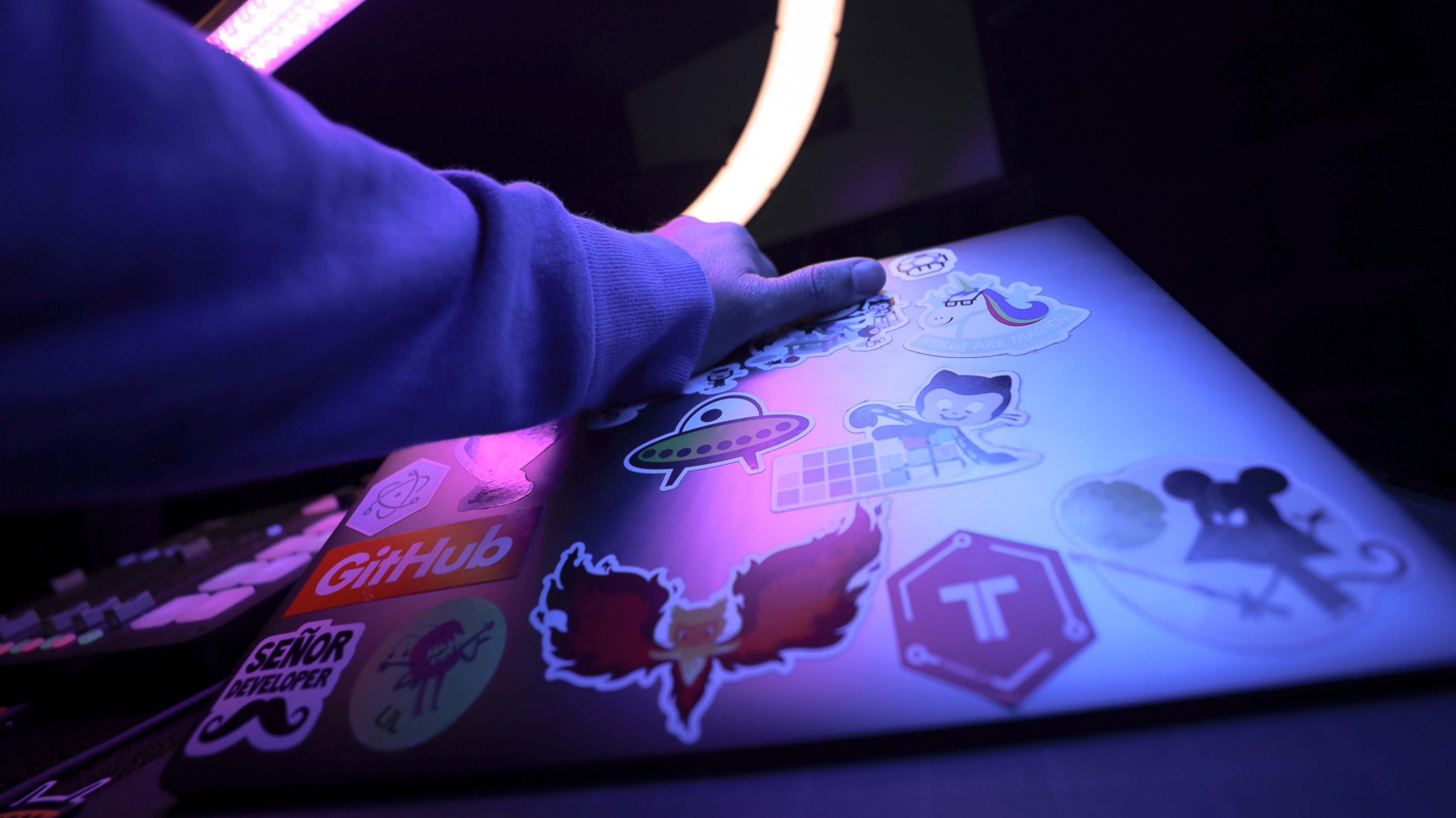 I spent some time updating my website this weekend. It always starts with the foolish thought…I just need to update a couple of things, it'll just take a couple of minutes…then several hours later, you're like WHY DID I FALL FOR THAT AGAIN!!! Honestly, just this minute I don't even know why I thought I needed an update. 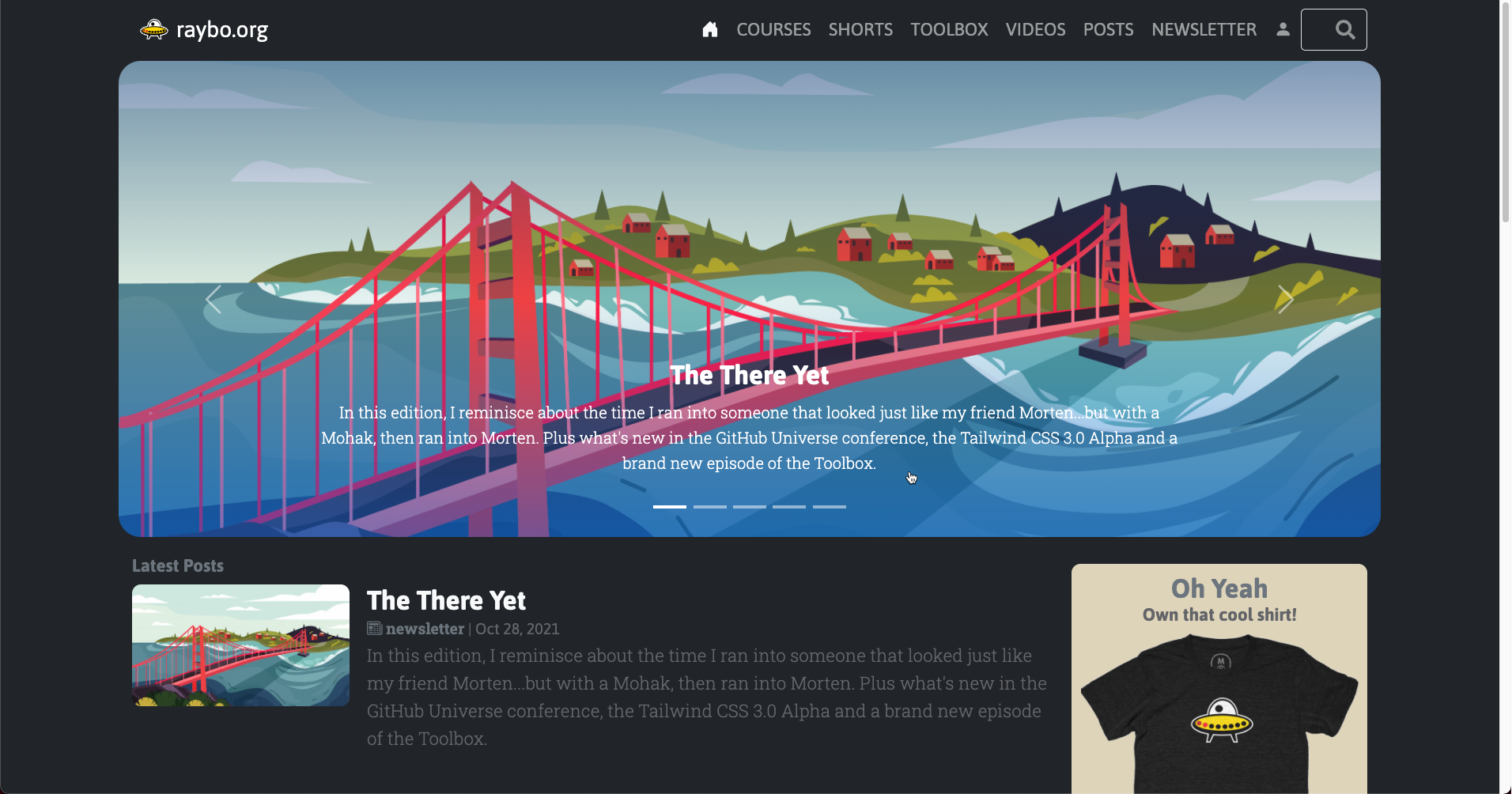 Anyways, looks better, but once again, some things broke. Still, I think it's a nice update. I could always spend eons tweaking things, but at some point, I have to go back to work. It helps that I don't sleep much. See you next week.